Hooray!! We are jumping for joy as we have just been awarded the Feefo Gold Trusted Award by Feefo!
To celebrate, we are offering FREE UK shipping on all orders until Monday!

your First Order with Us when you subscribe to our Newsletters

Receive first-hand access to exclusive discounts, helpful tips and advice on all things health & wellness for your dog.
* Valid for Online Shop Purchases Only. Does not Apply to Products Already on Offer.

I am so excited

to take a part in this autumnal gathering of maker & sellers. P&P is dog friendly and last year I went and visit with Rosie & Jasmine. This year  I am taking my stand… and maybe Rosie, as she likes to help.

The proceeds from selling seasonal soups, cakes and treats will do to Dogs Trust.

And bring along your carved pumpkin to win a prize!!

Tinker and I had a fantastic day , on the 10th June! We took part in the Muddy Dog Challenge to raise money and support for Battersea Dogs & Cats Home. It was the first one of a few of these events and took place in the grounds of the spectacular Wollaton Hall, an Elizabethan mansion, on a hill in Wollaton Park, near Nottingham.

The first group started at 9:30 am and then 10-15 people were sent off in batches every ten minutes thereafter. Tinker and I were in the second group, and after a short warm-up we shot off! I was so impressed with Tinker’s speed … normally she is just comfortably, slowly trotting next to me (maybe because I am too slow for her? Lol), but because she was running with other dogs she was more keen. On the track, there were 14 under and over obstacles, like a dog maze of muddy tunnels, a doggy ball pit, a tyre wall, A-frame, trampolines and lots of other fun obstacles! During the run, we both had a chance to refresh with plenty of drinking stations.

While we were running, our stand was in the capable hands of my lovely friend Sam. When they showed us our stand location that morning, we were really excited, next to the vegan food stand and not far from the loos … how perfect is that?!

If you fancy doing something different with your four-legged friend and supporting a good cause, don’t hesitate to visit the Battersea event page, there are still Muddy Dog Challenges running across various locations until the end of September: https://muddydog.battersea.org.uk/all-locations Do you want to learn how to create the cutest Schnauzer face ever? Don’t miss this seminar!

Lisa Hart is a award winning groomer with 14 years of experience in dog grooming and handling dogs of all breeds. She very much enjoys and likes to specialize in Asian Fusion styles. She has won Asian Fusion classes at the British Dog Grooming Championship and Strictly Come Grooming with other placings at The Grooming Show in 2017 and 2018. In her busy schedule she still finds time to volunteer to groom at local rescue centres.

We have up to 15 places available for the morning seminar/demo for £45; 5 places are available on the afternoon workshop at £40. Combined places are discounted to £80
Fee is payable via PayPal to: enquiries@vitacanis.co.uk

Lunch an drinks are provided. On the 3rd of September I did a talk about Vita Canis products for Scottish Terrier Club of England. The talk was a part of the Open Show at Baginton, Coventry, and I am very grateful to the committee of the club for inviting me. I had a great time with lovely ‘scottie people’, and I hope they enjoyed it and also the products. As a bonus I’ve seen Martha’s puppy George who won Best Puppy at the show 😃 Unfortunately I don’t have any photos but at least you can see lovely George with his handler Gail. Gail won BOB at Crufts this year with her Scottie Balou, who is by the way George’s dad 😎👍

Look forward to having a stand at Fox Terrier Expo this year! Come along to our stand to try our products, get special offers & spoil your dog & yourself 🙂

We are delighted to be attending the 2017 DogFest, being held in the wonderful Arley Hall in Cheshire.

Hosted by Supervet Professor Noel Fitzpatrick, DogFest is the paw-fect day out for dog lovers, providing a fun-filled, action packed day out for you and your dog!
See Noel Fitzpatrick Live, as he takes to the stage revealing the latest advances in the veterinary profession and recounting heart-warming success stories from past shows.
Join the Big Tick Great Dog Walk, a charity walk around the beautiful festival grounds, taking place twice a day. Take part in ‘have-a-go’ sessions with your dog, including Dog Diving, Temptation Alley, the Big Dog Dig and many, many more! Watch agility displays, learn training tricks, and see the fabulous Dogs with Jobs display. Enjoy a bespoke dog shopping area, with everything available to spoil your dog rotten, and perhaps even treat your pampered pooch to a grooming session.

Make sure you treat your dog to the ultimate doggy day out this year!

Come along to our stand in Arley Hall, Stand 181 and say hi!

Make Your Own Natural Treatments at Home!

DOWNLOAD THIS FREE 10-PAGE GUIDE TODAY WITH TREATMENTS FOR YOU, YOUR DOG AND YOUR HOME.

INCLUDES 4 HOME TREATMENTS FOR YOU TO MAKE AT HOME WITH EASY TO FOLLOW STEP-BY-STEP PICTURES AND INSTRUCTIONS.

Recreate these natural treatments so that you and your fur friend can start to benefit from the amazing goodness of nature today! 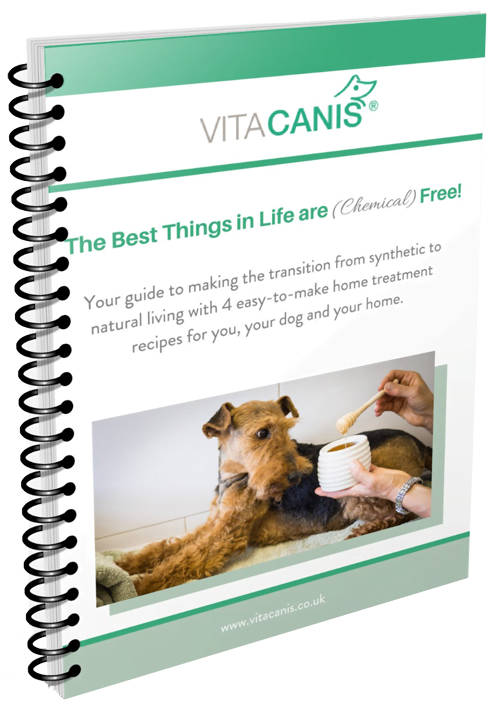 Used you’re Calming Floral  Spray yesterday was so impressed with it . I had a dog in my salon that has dryer seizures and gets anxious. I sprayed it around her and was remarkable the difference in her behaviour. It actually worked so well I had to check dog was okay she was very relaxed snoozing I’ve tried other remedy’s with no real effect shall be sticking with your calming spray from now on 😍
Lisa Addison